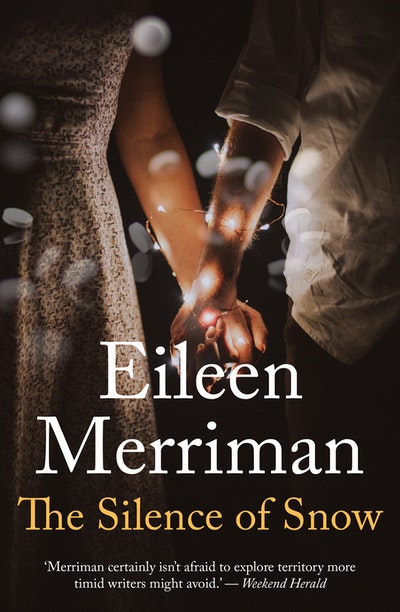 A compelling medical novel about facing one’s demons, self-prescribing and finding the strength to carry on, even when it seems that all is lost.Anaesthetic Fellow Rory McBride is adrift. Since a routine procedure went horribly wrong, he has been plagued by sleeplessness, flashbacks and escalating panic attacks.

Jodi Waterstone has recently started work as a first-year doctor at the same hospital, and the night shifts, impossible workload and endless hours on duty are taking a toll.

Both are trying to stay in control of their lives, but Rory starts to self-medicate with sleeping pills and sedatives to help him get through the nights . . . and the days. Before long, the sedatives aren’t enough. Can Jodi save him from himself?

Eileen Merriman’s three young adult novels, Pieces of You, Catch Me When You Fall, and Invisibly Breathing, were finalists in the NZ Book Awards for Children and Young Adults in 2018 and 2019, and all three were Storylines Notable Books. Her fourth young adult novel A Trio of Sophies was published in 2020 to huge critical praise and was also published in Germany. Her first adult novel, Moonlight Sonata, was released in July 2019, with reviewers calling it ‘skilfully crafted’, and a ‘carefully layered and thoughtful drama, with beautifully observed and believable Kiwi characters’. It was longlisted for the Jann Medlicott Acorn Prize for Fiction 2020.

Praise for The Silence of Snow

I could pick Eileen Merriman’s writing anywhere, especially the way she’s been writing lately. She has struck on a particular minor key that rings across each page, clear and sharp and quick. It makes you want to listen close. It makes you uncomfortable . . . She writes grief and shock and death, particularly death, with an acute sense of familiarity – an ache. She writes love with a sweet ache, too, from the electric first bite right through to the bittersweet bedding-in. Love, urgent and invigorating, crackles across The Silence of Snow . . . A page or two in I felt the same helpless compulsion as I do sometimes with my phone: I carried this book everywhere with me, knocked off a chapter while making the kids’ pasta, propped it open on the bed as I folded washing. I read it until midnight knowing I’d be up again with the one-year-old in a few hours, and cried over the last pages at the breakfast table. . . There is a deep and compassionate knowingness about the way Merriman writes addiction . . . There are so many scenes where we see Rory make the right decision almost, and you know how fine a rail he’s walking, and you see the fall coming, and he doesn’t, and so here we are again, screaming. . . Here is the real magic: without overwriting, Merriman somehow ropes in all the senses, elevates them. Arousal, I guess you’d call it. Flow. Fresh air. . . and all you’re doing while you’re reading this novel, and after, is thinking about it.

I cried actual page-blurring tears reading the latest novel by Auckland writer Eileen Merriman. . . . It's a drama that tackles some serious themes – such as the way young doctors are routinely overstretched and overtired, and the complexities behind medical misadventures – but these are stitched into the story seamlessly and never allowed to hamper the pace or distract from the emotion. There's lots of dark but also enough light, like the wry references to TV hospital drama Grey’s Anatomy and doses of the darkish humour that real-life hospital staff tend to use to keep themselves sane.The prose is fluid and flowing; words aren’t wasted here, but that's not to say the writing isn’t evocative. . . . Merriman is an instinctive storyteller with an innate sense of timing. There's a misconception that if a novel is easy to read then it must have been easy to write. If anything the opposite is true. You can cover a lot of flaws with layers of fussy, frilly prose, but paring a story to the essentials – an engaging plot, authentic characters, a world that comes alive – takes real craft. Merriman achieves that with The Silence of Snow.

‘Compelling medical drama’ – these three words on the back cover of the latest novel by Auckland writer Eileen Merriman will be a flickering flame to readers already bedazzled by the televised versions of the genre. . . The Silence of Snow meets the brief with aplomb. . . . With all the markings of a standard hospital romance, The Silence of Snow then changes the game plan.

The novel describes the conundrum of people under great stress in an occupation that offers them free access to addictive drugs – it is chilling how Rory has such facility with the technical effectiveness of the various drugs he takes. And Jodi becomes aware of, and complicit in, the blurring of the edges around “do no harm.” . . . . The writing in The silence of snow becomes totally immersive, I live in Nelson and could imaging the settings in and around Whakatu perfectly, I even had a look to see if Gin Lane actually existed! The use of quotes from the poems both Jodi and Rory love, is poignant, especially when Jodi ends up reading aloud one of their favourites, The love song of J. Alfred Prufrock, at a particularly difficult time. Although the pacing is measured, it is still a roller coaster ride of a read. And has absolute gems like one of the doctors sharing a ‘fact of the day’ with Jody, that whales who sing in the wrong key get lost and are alone in the ocean. A beautiful metaphor, for “[i]t only takes one slip-up” for a life to drift off key, and drift away, even from those you love. And in the end The silence of snow is a love story, just not the type you thought you had in your hands at the beginning. A lovely, awful, and thought provoking read.

Yes, this is a love story. But it's so much more than that. The reader is thrust into a world where hospital doctors are on shift or on call for stupidly long hours and are then expected to make sound judgments in life or death situations. Rory is suffering from undiagnosed post traumatic stress disorder and in a world where to complain is to fail or to be weak he self-medicates, suppresses his emotions and carries on. The narrative sweeps us along. Will they, won't they? Betrayal, lies, dubious choices. Rory and Jodi are emotionally complex characters with professional and personal pressures that make their decisions easy to judge harshly - but who are we to judge when they are such relatable human beings? . . . Merriman is adept at drawing us into the hearts and minds of her characters making The Silence of Snow a compelling page turner, a thrilling romance, a distressing drama. I don't often cry but this story was so immediate, accessible and real that my mind had conjured the characters and turned them into people I know. Emotionally draining and enlightening, this is a novel to be read in large chunks with a mug of tea and a box of tissues.

This is a page-turning medical drama, that feels fresh and authentic. Eileen has created characters that are multi-layered and real, both Jodi and Rory trying to keep control of their lives that are out of control in different ways. It certainly highlights the toll exhaustion and too many cases has on our medical professionals. And it also highlights how complex drug addiction is, and how difficult it is to remedy. I’d love to see Eileen write more medical dramas like this– this book is a cut above similar books.

Merriman presents a wincingly real portrayal of the inner turmoil and voice of someone who knows they're descending into darkness as they grapple to maintain a ruse of normality. Crafted beautifully alongside the development of a new relationship, with all its heady wonder, readers will be swept into a book that shows how we use masks to hide what we fear people will struggle to love - because we see them as our greatest shame. And it also makes you start to grapple with the - at times horrendous - burden and workload those in our medical professions can face.

If you can get through The Silence of Snow without shedding a few tears, then you are tougher than me. The characters in this book lead lives that seem very real, so they are relatable, which makes for an emotional story. Author Eileen Merriman is a doctor and perfectly poised to write an authentic hospital drama. She is also a natural storyteller, a writer of sharp and readable prose that pulls you right into the novel's world. . . . an effortless read, often fun, soapy and light, a novel to make you smile as well as cry, and very romantic in parts. Still, it tackles some serious topics . . .

In addition to having produced a number of award-winning novels, she works full-time as a consultant haematologist. In The Silence of Snow she describes a world of sleep deprivation and constantly beeping pagers in perennially short-staffed, highrisk environments. As witnessed in Rory and Jodi, work-life balance is far off kilter and professional performance compromised. Ironically, this is the environment least negotiable, as the price is life or death. Merriman's latest novel portrays an exhausting world, but for the reader looking in it is also entirely addictive. The language of the romantic thread often sounds like a television drama, but in this way it never strays from messy real life. Merriman is most in command in the world of the hospital, where professionalism is deeply compromised by ordinary people perhaps only just hanging on.

Eileen Merriman, author of The Silence of Snow, has provided some background information on her latest book along with some discussion points for your book club meeting!