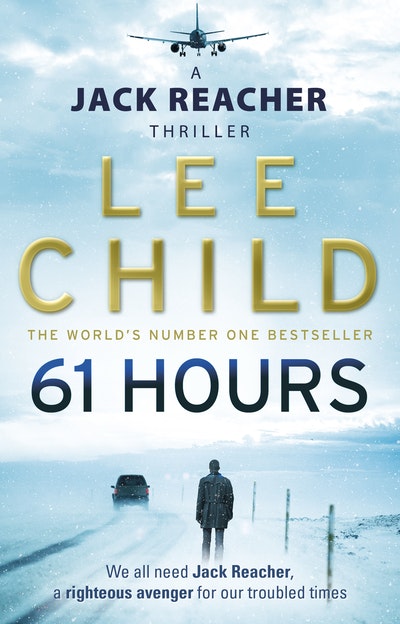 Get ready for the most exciting count-down of your life! Winner of the prestigious Theakstons Old Peculier Crime Novel of the Year prize, and chosen by the Sunday Times as one of the 50 best crime/thrillers of the last five years, 61 Hours stars today's most admired action hero, the gallant and enigmatic loner Jack Reacher.

GET READY FOR THE MOST EXCITING COUNT-DOWN OF YOUR LIFE

HOUR SIXTY-ONE
Icy winter in South Dakota. A bus skids and crashes in a gathering storm. On the back seat: Jack Reacher, hitching a ride to nowhere. A life without baggage has many advantages. And disadvantages too, like facing the arctic cold without a coat.

HOUR THIRTY-ONE
A small town is threatened by sinister forces. One brave woman is standing up for justice.If she's going to live to testify, she'll need help from a man like Reacher.Because there's a killercoming for her.

HOUR ZERO
Has Reacher finally met his match? He doesn't want to put the world to rights. He just doesn't like people who put it to wrongs.

_________
NOW READ THE SEQUEL: Although the Jack Reacher novels can be read in any order, the ending of 61 Hours is directly followed by Worth Dying For.

Child has somehow forged that magical grail: a new and believable hero. Reacher is strong, tall, principled and a quiet master in unarmed combat. But he's also a wizard at determining likelihoods, at extrapolating miniscule details and thus forming chains of inferred logic ...celebrate the achievement of giving us addicts a new and mesmerising fix, when we thought all the heroes had been written.

It is always a pleasure to read another Jack Reacher novel. A kind of highlight of the year, really. There is only one downside. It's all the other people hanging around your house saying things like, "Oy! Haven't you finished with the Reacher yet?"

A storyteller who knows a lot about style...Watching the clock underscores the tension that Child builds so well. You do and you don't want it all to end.

Explodes into one of the best thrillers I've read for ages. Lee Child is a Brit who has managed to becomes more American than most US authors...61 Hours is destined to do big things...Superb stuff!

This is the first of Lee Child's popular Jack Reacher novels I've read. I'd assumed they were merely the macho adventures of a boneheaded lone wolf:lots of guns and explosions and little to occupy the mind. Well, I was wrong: there's also an abundance of intelligence and surprise. 61 Hours is a first-class thriller...Child delivers it brilliantly.

In many ways it's the most climactic Reacher ever...There's a sequel planned for this autumn. Can't wait!

Reacher is an iconic modern thriller hero: the ultimate loner...won't disappoint the British-born Child's millions of fans...Fast, compelling and with that nugget of poignancy that sets the hero apart.

Child spins a great yarn, his descriptive powers are austere yet glorious...He could take out Bond, Dirty Harry, Jason Bourne and Ethan Hunt with both hands tied behind his back. And then sleep with their girlfriends two at a time before getting the last bus out of town. All without untying his hands. The Reacher novels are literary beat-'em-ups for the pre-console generation. They are, like the hero, simply irresistible.

As always with Child, the hook is smart, the plot possibilities are given a thorough workout, and the tension bites as hard as the South Dakota windchill.

One of the many delights of Child's extraordinary sequencewof novels is Reacher's 360-degree intelligence...there are now Lee Child copycats aplenty. Save your money for the real thing.

Lee Child certainly knows by now how to screw up the tension with excruciating precision, but here excels himself with a beautifully paced tale that leaves the reader breathless with suspense as the final hours tick away.

Craftiest and most highly evolved of Lee Child's electrifying Jack Reacher books...That legend of a tough, cerebral drifter, a latter-day 6-foot-5-inch cowboy...has now taken on a life of its own..The truth about Reacher gets better and better.

A Hitchockian escalation of tension...brings to mind another iconic Jack (Bauer, from the TV series 24)...works disturbingly well.

The writing's superb, and the plot's gripping and completely believable. A real page-turner.

A powerhouse of tension and nail-biting suspense...an excellent and masterful work of fiction.

It would be foolish to call 61 Hours the best Reacher adventure yet, since they're all excellent...just that bit more thrilling than some of the others...another gripping, cunningly constructed, compellingly written thriller.