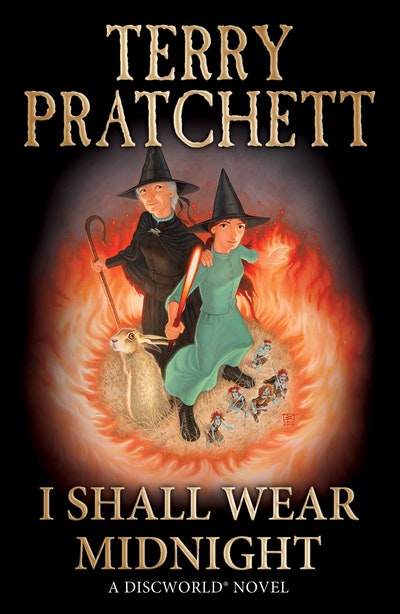 I Shall Wear Midnight

It's not easy being a witch, and it's certainly not all whizzing about on broomsticks, but Tiffany Aching - teen witch - is doing her best.Until something evil wakes up, something that stirs up all the old stories about nasty old witches, so that just wearing a pointy hat suddenly seems a very bad idea.Worse still, this evil ghost from the past is hunting down one witch in particular. He's hunting for Tiffany. Andhe's found her . . .

A fabulous Discworld title filled with witches and magic and told in the inimitable Terry Pratchett style, I Shall Wear Midnight is the fourth Discworld title to feature Tiffany and her tiny, fightin', boozin' pictsie friends, the Nac Mac Feegle (aka The Wee Free Men).

When she’s not trying to take over the world or fighting sock-stealing monsters, Laura Ellen Anderson is a professional children’s book author and illustrator who lives in north London. The creator of Evil Emperor Penguin for the Phoenix comic, she is also the illustrator of Sibéal Pounder’s Witch Wars series and CBeebies presenter Cerrie Burnell’s picture books and Harper fiction series. Laura’s first author/illustrator picture book, I Don’t Want Curly Hair, was published by Bloomsbury in 2017. She has also created new cover illustrations for Enid Blyton’s Famous Five series.

Praise for I Shall Wear Midnight

Teen witch Tiffany is one of [Pratchett's]most formidable creations yet

The final adventure in Pratchett's Tiffany Aching series brings this subset of Discworld novels to a moving and highly satisfactory conclusion. Tiffany, now nearly 16 years old, is forced to do battle with the hate-filled ghost of a long dead witchfinder, the Cunning Man, who has become obsessed with the young witch and is gradually turning her own community against her. As ever, Tiffany is ably supported by her loyal, intensely fractious, and totally amoral companions, the Nac Mac Feegles, whose leader, Rob Anybody, believes, "After all, ye ken, what would be the point of lyin' when you had nae done anything wrong?" She must deal with the heavy workload of a professional witch (birthing babies, training apprentices, and the like), fight evil, and come to terms with her former boyfriend's impending marriage. Pratchett's trademark wordplay and humor are much in evidence, but he's also interested in weightier topics, including religious prejudice and the importance of living a balanced life. Tiffany Aching fans, who have been waiting for this novel since Wintersmith (2006), should be ecstatic.

Although he knows how to weave a story, the real fun of Pratchett's books is the line-by-line inventiveness: the jokes, aphorisms and insights. This book brings back the young witch Tiffany Aching, now 16 and much in demand helping the sick, the poor and the old, using her special power to alleviate pain. As she exhausts herself doing good, a new wave of suspicion about witches spreads, stirred up by an eyeless monster whose power is "rumour and lies". Tiffany, aided in her tasks by the hilarious, belligerent, little, kilted Feegles, also confronts issues of the heart, as her friend Roland, the baron's son, is about to marry a frilly girl who is not all she seems. As Tiffany tackles domestic drudgery and the monstrous villain, Pratchett brings us reflections on the role of women, the dangers of religion and the follies of society. And, writing at the height of his powers, he makes us laugh a lot.

... everything gets very funny

Adventure, magic and the usual dark, dry humour will keep you entertained from start to finish.

There are entertaining twists, humorous moments, and just enough romance to leave everyone happy at the end of the book.

a must for all Pratchett fans

As the well-places plot unravels in Pratchett's inimitable style, it goes without saying that everything gets very funny. Like Tiffany, Pratchett has always known that "laughter helps things slide into the thinking".

Pratchett's book is suffused with an awareness of the thankless exhaustion which awaits people in the caring professions.

A must for all Pratchett fans, young and old.

As the well-paced plot unravels in Pratchett's inimitable style, it goes without saying that everything gets very funny. Like Tiffany, Pratchett has always has always known that "laughter helps things slide into the thinking."

Sure to be a huge seller over Christmas, the fantastic new teen title from the king of fantasy, Terry Pratchett....This is much darker than the previous Tiffany novels, as Tiffany grows up along with the readers. That said, it's still filled with Pratchett's trademark quircky humour.

If you must have more contemporary fantasy for your almost-teens, then the bogglingly prolific Terry Prachett has a new junior Discworld title: I Shall Wear Midnight

The Independant on Sunday

Although I Shall Wear Midnight, the fourth volume in the Tiffany Aching books by master of fantasy worlds Terry Pratchett is marked as being for younger readers, this is a book that older fans can't help but enjoy. Full of puns, allusions and some very odd characters, including Tiffany's ex, this is a book to laugh your way through.

There are suprising revelations about other acquaintances in this action packed story with dark moments lightened by humour, not least from the wonderful Nac Mac Feegles. Full length novel for older, capable readers.