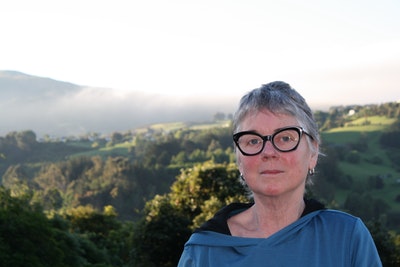 It took over an hour to cover the distance from his house truck to the southern boundary of Cook airport. Along the way Callum stopped many times to look at the view, pick up shells, peer into pools and collect pieces of flotsam. He carried several plastic shopping bags and a large rucksack for transporting them once they were filled with rubbish. He had collected a wide range of plastic drinking bottles as well as numerous food containers, bits of plastic, tangled bundles of fishing line and lengths of brightly coloured packing strap, and his pack was beginning to feel heavy. He was skirting a particularly large rockpool, jumping from one large boulder to the next, when a movement at the bottom of the narrow space between the rocks caught his eye. Already airborne, he was only able to take a quick glance and guessed it was yet another plastic bag floating in the shallow water flowing between the rocks. There was something curious about the waving motion, however, and he bent down to scan the shadowy gap. It took a moment for his eyes to adjust to the dark, then through the gloom he saw the lowered head and long neck of a bird. Tangled around its body was a mass of fishing line that glistened with drops of water. While Callum watched, the bird attempted to wriggle and flap free from where it was trapped at the base of the low ravine, but managed to move only a few centimetres before giving up.

Callum sat back on the edge of the rock. As he considered his options a large wave broke nearby and washed through the gap, submerging the bird for several long seconds. As if in protest, the creature shook its head, causing the tangled web to shimmer in a small splinter of light from above. It was clear that if he left the bird, it would die from starvation and exhaustion or drown with the incoming tide. If he attempted to rescue it, however, it might die from shock or its injuries. The bird seemed to have given up trying to work itself free from the fishing line and now lay still, its left wing not so much flapping as lolling in the wind. Its blue-green eyes surveyed Callum, as though expecting, or perhaps wishing, for one final blow. For a moment Callum wished he hadn’t seen the bird. He could so easily have missed it and completed his walk in ignorance and peace. He looked at the bird more carefully. At first he had thought it was a young gull but now it was clear that it was some kind of shag. Its head and body were a pale brown-grey, with a smattering of darker, more distinct spots across its back. There were no white markings on the bird and, perhaps only because it seemed so helpless, he decided it must be young, not fully fledged.

Occasionally, when he was on a job, he would hear stories about birds blown onto the rigs during storms. Exhausted and often dazed, they might rest for a few days, taking food that was offered by the workers, but mostly the birds died. Although he had never taken part in a bird rescue himself, he set about preparing to capture the shag, first removing his jacket and emptying his pack.

As Callum arranged his gear on the rock he stole glances at the bird. It hadn’t moved since its feeble attempt to untangle itself. As far as he could tell, it was perched on a shelf, wedged in by the rock walls on either side of the small canyon. The most direct way of reaching it would be from above, where Callum was crouching, but he was too far away to get a firm grip on the bird. He doubted he would be able to do much more than stroke its feathers if he were to reach down. The only other possibility was to attempt to get the bird from the seaward side of the ravine, but the gap was so narrow that Callum wouldn’t be able to wriggle in far enough to reach it. Moreover, he would have to endure the surge that washed over the rocks with every large wave.

He felt doomed. He could call the SPCA and pass the problem on to them but, with the tide coming in, he doubted the bird would last until they arrived. He looked around and found a long piece of smooth driftwood; he might be able to give the shag a gentle prod, and encourage it to move towards the wider section of the ravine. Even if the bird moved only a few more centimetres it might make all the difference. Very carefully he lowered the stick and eased it towards the bird. The shag watched, then its body heaved and a mass of brownish liquid spurted from its mouth, filling the space with the smell of rotting fish and weed. Other than that, it did not move.

A wave came in and washed over the shag, tumbling it first one way and then the other, leaving it bedraggled and limp on its narrow shelf. This time it didn’t raise its head as Callum repositioned the stick into the crack. It eyed him, motionless, as the rounded end of the driftwood came into contact with its body. Increasing his force, Callum tried once more to push the bird towards the sea and this time the shag responded by clacking its bill feebly before falling back onto the ledge.

Callum muttered, ‘I’m just trying to help you’ and rested on his heels, watching as yet another wave swept over the bird. He sidled forward towards the edge of the rock and attempted to figure out a new way to reach the bird. One length of the fishing line was taut, and by following it back he could see that it was hooked into a small fissure towards the rear of the ravine, but he had no idea how he could get to it. He didn’t even have a penknife with him and there was no way he could drag the shag out of its trap without first breaking the line. A cry of frustration burst from him. As if in response to his helplessness, the bird gazed up at him, blinking when yet another wave swept over its body.

Again Callum looked around, his eyes settling on a rounded rock the size of a coconut. If he couldn’t save the bird, then at least he could put it out of its misery. But he knew he would be unable to get a good enough shot at the shag’s head. The curve of the walls, and the small protrusions, would throw the rock off target, and it would most likely just catch the side of the bird’s head, or break its back. ‘If you could just help . . .’ he pleaded.

Another surge of water came in and Callum hurled the rock out to sea, yelling at the waves to ‘fucking stop’ for a minute. What could he do next? In his mind he saw himself sitting with the bird, keeping silent vigil as the life gradually, painfully, seeped from its body. What good was keeping a bird company while it died? He might as well just pray for it.

Agitated, he searched through the pile of rubbish he had collected from the beach, hoping that something useful would catch his eye. A white plastic knife with a small serrated edge fell out of one bag and he grabbed hold of it and hurried back to the space between the rocks, praying that somehow he might be able to cut free the taut end of the fishing line. He lowered himself as far as he could into the ravine, but now his body blocked his view of the bird and the line. A wave splashed the walls and sprayed ice-cold water over his head, blurring his vision. The crack was too narrow. He could only ease one hand into the space where the line was hooked, and the plastic knife, sawing away at something, twisted uselessly in his fingers. After only a few minutes it fell from his hand, landing next to the shag. Again, the bird heaved in protest and this time what looked like a mixture of dirty water and runny shit oozed from its bill.

Callum found another length of driftwood, and lay down on his stomach and attempted to unsnag the hook by lifting the line with his stick. Each time he tried, he succeeded only in raising the line a few centimetres before it fell free from the smooth stick.

The tide, he noticed, was quickly advancing up the gap between the rocks, and the bird’s lower half was now resting in a shallow pool of water. With each wave, the pool grew a little in size, and its surface began to ripple. He hadn’t tried to approach the bird via the narrow gap closest to the sea but, fearing he had nothing to lose, he peeled off his T-shirt and tried to squirm between the rocks. He managed to gain only a few centimetres before a large wave washed over his back, causing him to gasp from the cold. The bird disappeared into the surge, rolled slightly, before first one wing and then its tail surfaced. Its head remained below the water for several more seconds and then that, too, slowly rose and its blue-green eye flickered and closed. Callum was certain it was dead but a moment later its eye opened, seeming to give a look of surprise, and then another wave tumbled the bird once more.

With one last frantic wriggle, Callum stretched out as far as he could, his fingers making contact with the tangled, slippery line, and then the bird’s wing feathers. Helplessly, he latched onto the wing and tugged, feeling the wing extend as he attempted to pull the bird towards him. Water surged over his head and instinctively he held his breath, managing somehow to keep his grip as the wave flowed over him. He prayed that he would feel the bird’s body float free of its trap, but apart from the movement of the wing nothing changed. Fearful that he might dislocate or break the wing, he stopped, rearranged himself and tried again, this time shifting his grip slightly in an attempt to ease his fingers beneath the bird. But he couldn’t reach. There was nothing he could do.

He clambered back to the top of the rock and sat shivering as he tried to come up with a new plan. From his place above the ravine he could see the shag’s body floating on the water, its head contorted from the pull and release of the hooked fishing line, which still gave no indication of snapping or coming free. If he could just reach the shag with one hand, he might be able to strangle it or break its neck, but even as the thought passed through his head, he knew there was no point. In a minute or so the water would cover the bird completely and it would drown. How long would that take? Surely a diving bird must be able to hold its breath for quite some time? At that moment, an image of his old diving companion, Ron, entered his mind but quickly vanished as the shag’s head surfaced briefly, butting gently against the side of the rock wall. As Callum watched, a wave rolled through the gap. The shag’s beak opened and it filled with water and then the bird twisted and sank, disappearing beneath the surface, swallowed by the shallow channel of water.

This first appeared as part of the novel Reach, 2014, Penguin, and has since been extracted as a short story in Bird Words, edited by Elisabeth Easther, 2017, Vintage