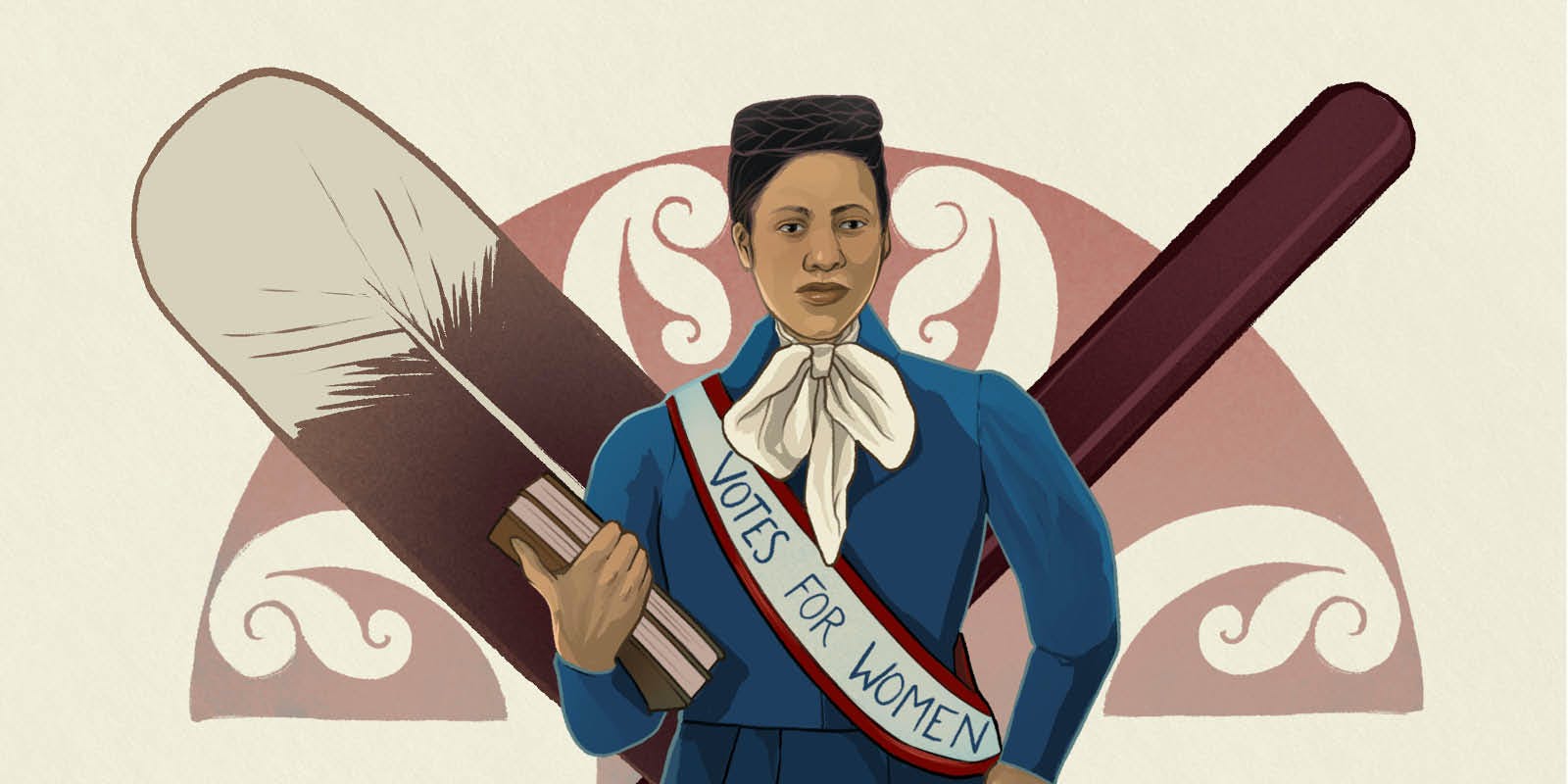 Work with honesty and integrity, by its blooming is your contribution known.

Meri Te Tai Mangakāhia was born in Lower Waihou, near Panguru, in the Hokianga. Meri was descended from a great woman of mana, Ngākahuwhero, and her father, Re Te Tai, was an important leader. He encouraged his daughter from a young age to hold high ambitions for herself and her people.

Meri would often accompany her father to hui with important people like Te Rangi Hīroa and Sir Āpirana Ngata, and she quickly became used to the ins and outs of politics and debate.

When still a young woman, Meri married Hāmiora Mangakāhia, a chief and also the first Premier of Te Kotahitanga – the Māori Parliament.

She and Hāmiora would travel around Aotearoa together. It was not easy for Meri to leave her children and home behind, but she knew she had been given many freedoms and privileges in life and wanted to ensure the same for other Māori women. ‘Of course, we should have a say,’ she thought. As Meri met with women all over the motu, their inspiring stories fuelled her drive to make sure that wāhine Māori were treated fairly andequally in everyday New Zealand life.

Then, in 1893, came an important opportunity that she couldn't pass up. She was invited to give a speech at Te Kotahitanga – and she would be the first woman ever allowed to do this.

Standing in front of the entirely male parliament, she made a passionate plea for Māori women to not only have the right to vote, but also to sit as Members of the Māori Parliament, representing wāhine Māori alongside their Māori brothers. There was no ignoring her beautiful kōrero as she described the many obstacles Māori women had to overcome – all powerful reasons for wāhine to have their voices heard and to have a bigger role in decision-making and the direction of the country.

Meri finished her rousing speech by suggesting women might even have better success than men: ‘Perhaps the queen may listen to the petitions if they are presented by her Māori sisters, since she is a woman as well.’ And though it took four more years, Meri’s vision came true in 1897, when Māori women finally won the right to vote for members of Te Kotahitanga. In her own quiet, considered way, Meri fought tirelessly for Māori women to have a louder voice.

An award-winning and powerful illustrated storybook for the tamariki and rangatahi of Aotearoa New Zealand celebrating Maoritanga!

For this crossword, you simply need to translate the given word. Don’t forget, though: to enhance your learning, take some time to learn the meanings of the words in English and commit them to memory once you have completed each crossword.