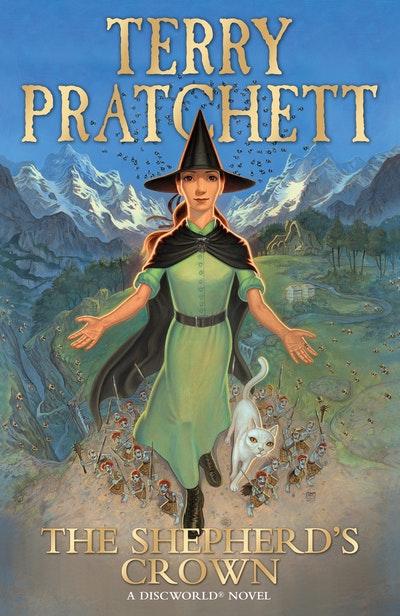 Sir Terry Pratchett's final Discworld novel, which features the witch Tiffany Aching. This ebook edition includes an exclusive commentary on the Witches of Discworld, written by Jacqueline Simpson, co-author of The Folklore of Discworld.

This ebook edition includes an exclusive commentary on the Witches of Discworld, written by Jacqueline Simpson, co-author of The Folklore of Discworld.

A SHIVERING OF WORLDS

Deep in the Chalk, something is stirring. The owls and the foxes can sense it, and Tiffany Aching feels it in her boots. An old enemy is gathering strength.

This is a time of endings and beginnings, old friends and new, a blurring of edges and a shifting of power. Now Tiffany stands between the light and the dark, the good and the bad.

As the fairy horde prepares for invasion, Tiffany must summon all the witches to stand with her. To protect the land. Her land.

Paul Kidby is thirty-four and lives behind an easel in Dorset. He is best-known for his illustrations of Discworld and its inhabitants in The Pratchett Portfolio, The Discworld Diaries, The Tourist Guide to Lancre and his prints and greeting cards.

Praise for The Shepherd's Crown

From the shadow of dementia, a brilliant novel shines: Terry Pratchett's last book is a funny, fearless farewell . . . This is a book worth reading twice in quick succession.

A joyful sign-off from a master of fantasy fiction . . . High-octane literary enjoyment.

Terry Pratchett was never so witty, direct and generous as in this, his final Discworld novel.

The Shepherd’s Crown is a sometimes sad, often funny and eminently suitable testament to the life and career of Terry Pratchett.

A crowning achievement for Terry Pratchett and his Discworld . . . This is a book for all ages, the tour de force of one of the English language’s greatest authors, who, in the midst of encroaching darkness and facing so many terrors of his own, has contrived to astound us one last time with his craft.

This final book stands among the very best of [Pratchett's] work . . . An exceptionally crafted finale from one of the greats

The last Discworld offering is a poignant farewell, both to Pratchett's readership and to his extraordinary world.

The last Discworld offering is a poignant farewell, both to Pratchett's readership and to his extraordinary world.

As ever in Pratchett's work, empathy and compassion are foregrounded. With its humour and humaneness, it reminds us, too, that its author, as Tiffany says of her deceased friend, 'is . . . was . . . unfollowable.'

Funny, sad and extremely moving . . . most will likely consider it one of the strongest, and certainly one of the most – possibly the most – moving [of the Discworld novels].