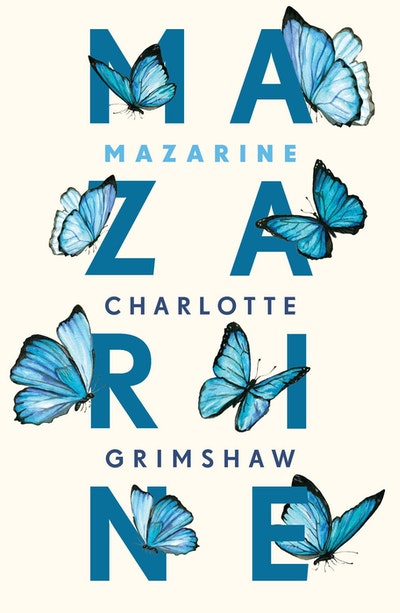 Intrigue mounts in this search for a missing daughter - and for love.

From award-winning author Charlotte Grimshaw, this is a beautifully evocative, sensual portrayal of a woman’s search for freedom and love.

When her daughter vanishes during a heatwave in Europe, writer Frances Sinclair embarks on a hunt that takes her across continents and into her own past. What clues can Frances find in her own history, and who is the mysterious Mazarine? Following the narrative thread left by her daughter, she travels through cities touched by terrorism and surveillance, where ways of relating are subtly changed, and a startling new fiction seems to be constructing itself.

In an era where ‘fake’ news creates a sense of ongoing insecurity about what’s real and what isn’t, Grimshaw exploits this by having, at the core of her novel, not only a novel-writing narrator who is unreliable, but a semi-intrusive author. . . . Grimshaw is playing with what literature can and cannot do. She is reminding us that fiction is always a lie, a story told that asks you to suspend disbelief. . . . I was left marvelling, not only at Grimshaw’s ferocious talent, but at her gall, her audaciousness, her mischievous ability to play with a reader’s expectations of fiction. Nothing is set up that can’t be kicked sideways. Paradox, smoke and mirrors, equivocation: things are not what they seem. And there’s always that feeling that there’s a sly joke at the heart of it. . . . This is an intensely readable, indeed engrossing, very filmic novel. It’s very likely to be prize-winning. And, broadly speaking, it works. While its message is that we’re living in times of great chaos, the novel mirroring this exists as a terrifying, memorable whole. I ended it feeling like a pathetic, panting puppy, my brain an unwelcome tangle. I applaud someone with the talent of the redoubtable Grimshaw, playing in a most timely manner with what is fiction and what isn’t.

Charlotte Grimshaw's latest is an absorbing, multi-layered mystery. . . . Grimshaw's novels always deliver tension, intrigue, drama. Her stories are contemporary, usually vividly set in Auckland or thereabouts and packed with plot. Serious doesn't mean po-faced, though. The book bristles with life and is full of sensations, humour, rippling interchanges and sudden poetry . . . It comments on society, not gauchely, but in passing glances and subtle asides. Grimshaw cares about the world we live in and asks us to care, too. . . . It's not just things verifiable: Grim.shaw builds involving emotional worlds.

Reading Charlotte Grimshaw is always a huge delight, sinking as she does into a place of implication, indirectness and suggestions of the sinister. With her multiple storylines and layers, as well as the intensity and paranoia of her characters, Grimshaw's work often strays near David Lynch-type territory. Her latest work, Mazarine, ups the psychological layers of content into an extremely confusing place, where characters and their motivations are contradictory, unsure, and yet persistent. . . . a meditation on disconnection, and the power of touch to restore.The world has become a very unsafe, uncertain place for both Frances and Mazarine as they attempt to make sense of both the ever-fractured external world, and also their own inner states. . . . Like her previous novels and short stories, reading Grimshaw is always unnerving, as she digs into what it might be to lose someone else, or even to lose oneself.

Her latest novel, Mazarine, sets off down parallel garden paths with her trademark control and self-assurance: Gone Girl suspense paired with middle-aged, female sexual awakening. At once domestic drama, psychological thriller – underscored with a buzzing note of menace about global terrorism and the surveillance state – and a sort of sensual coming-of-age tale, Grimshaw picks and chooses which tropes from each style to use and which to let lie. It’s a brilliant and disconcerting strategy. Grimshaw takes a dysfunctional family drama that could easily play out around Auckland dining tables and cafes, but makes it richer, more clever, and more deranged, by weaving in dangers on a global scale. . . . the parallels between the politics of her characters’ personal lives and the politics playing out on a global scale is where Grimshaw’s genius lies. There is much justified love for the New Zealand political satire of her earlier novels, along with their familiar cast of recurring characters, but by flinging Mazarine’s cast onto the world stage, she forces them into confrontation with our current preoccupations: tyrants around the dinner table and in parliament, fake news inside our heads and out – trying to figure out who we should be in a world where truth and reality seem less certain than ever before.

Grimshaw goes much further than simply dissecting an unreliable narrator. By various cunning strategies, she raises the whole question of how well we can really know other people, and how much our perceptions of them are simply so many "fictions". Indeed, by making Frances Sinclair a writer who is planning a novel, she suggests that published fictions often grow from the same sort of fears and speculations Frances nurtures.

In her customarily deft prose, Grimshaw unspools this dryly ironic tale of international connections and the threads that bind us all through the intimate labyrinth the modern world has become.

Grimshaw's dialogue expertly captures the hidden patterns of everyday conversation and she evokes mood and place brilliantly, from a rain-lashed, wintry Auckland to stifling heat in central London. The overwhelming sensation of the book is disorientation - when Frances is not dreaming, daydreaming or jet-lagged, she remains physically or emotionally lost. Following her can be a confusing journey but the high quality of Grimshaw's writing makes it worth the effort.

Mazarine is an ambitious novel, if only because it is being asked to bear an awful lot of weight. Only a writer of Grimshaw s ability could pull it off: she is an effortless prose writer, a superb manager of narrative.

In her newest novel, Grimshaw spins an intriguing contemporary tale of mystery, despair, love and self-discovery that kept me up far later than I intended.

Listener Best Books of 2018: Grimshaw’s absorbing ninth work of fiction spans the globe with a multilayered, character-driven mystery about an Auckland mother and writer trying to find her elusive daughter on a European OE.