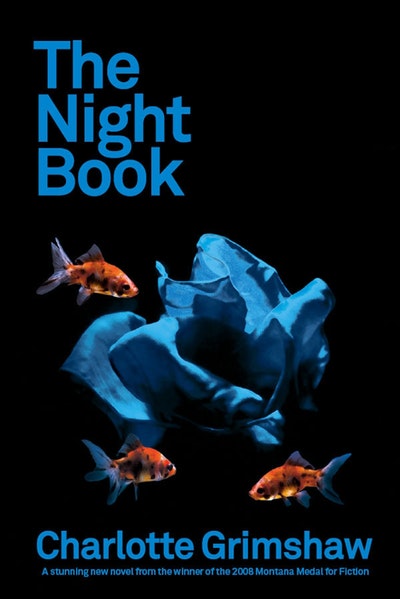 Shortlisted for the 2011 NZ Post Book Awards this is an unflinching novel on contemporary NZ society.

Award-winning writer Charlotte Grimshaw has turned her unflinching eye on contemporary New Zealand society in this intricate and elegant novel.

Sharp, moving, brimming with insight and observation, The Night Book is at once a meditation on power and politics, and an intensely humane look at the choices people make as they struggle, against the odds, to maintain love and integrity in their lives.

'It was this contemplation of the future that made Roza frightened, and that caused her to turn her mind, as she did now, harried and nervous, to the past. And then there was the question of Simon Lampton.'

Roza Hallwright leads a quiet, orderly life, working at her publishing job each day, returning home to the large, comfortable house she shares with her politician husband David and her two stepchildren. But this peaceful existence is about to be changed forever. In the next few months there will be an election, and, if the polls are correct, Roza will become the Prime Minister's wife. She has faced the prospect with relative calm, but a chance encounter with party donor Simon Lampton sparks a chain of consequences that will bring turmoil to both their lives.

Charlotte Grimshaw is the author of a number of critically acclaimed novels and outstanding collections of linked stories, which have been published in New Zealand, the UK and Canada. As a reviewer in The New Zealand Listener noted: ‘A swarming energy pervades every page she writes . . . her descriptive writing has always been of the highest order. Most of it would work just as well as poetry.’

She has been a double finalist and prize winner in the Sunday Star-Times short story competition, and in 2006 she won the BNZ Katherine Mansfield Award. In 2007 she won a Book Council Six Pack prize. Her story collection Opportunity was shortlisted for the 2007 Frank O’Connor International Prize, and in 2008 Opportunity won New Zealand’s premier Montana Award for Fiction or Poetry. She was also the 2008 Montana Book Reviewer of the Year. Her story collection Singularity was short-listed for the 2009 Frank O’Connor International Prize and the South East Asia and Pacific section of the Commonwealth Writers’ Prize. Grimshaw’s fourth novel, The Night Book, was shortlisted for the 2011 NZ Post Award. She writes a monthly column in Metro magazine, for which she has won the Qantas Media Award. She has also won reviewer of the Year at the Voyager Media Awards in both 2018 and 2019.

Commenting in The Guardian, Jane Campion said, ‘She is a master of mystery, very contemporary and astute. Her language is relaxed, spare and perfect.’

A full list of Charlotte Grimshaw’s titles, reviews and selected Metro columns can be found on her website: http://www.charlottegrimshawauthor.com/

Praise for The Night Book

Her skewering of the Auckland social elite is spot on from the boozed husbands to the over Trelised wives. Her novel is set around the Lampton family. Simon is a respected doctor; Karen is his social climbing wife. They have three children; the third, the girl, they adopted. It’s also the story of David and Roza Hallwright. David a self made millionaire is tipped to be New Zealand’s next Prime Minister but his minders are worried about Roza. They think she’s a loose cannon – and they’re right. This is a beautifully written novel – suspenseful, topical and a wonderful study of human relationships. If the ending’s a little overwrought – it doesn’t matter. The characters are fabulous and the writing’s superb.

Charlotte Grimshaw is writing some of the smartest fiction around.

I rate Charlotte Grimshaw as the most important, significant and arrestingly talented of our middle year writers. I finished The Night Book with regret and am now delighted that she is continuing some of its story lines.

A brilliant take on society. The Night Book’s got so much going for it; narrative drive, pace, suspense and beautifully controlled seamless writing . . . Quite brilliant.

This penetrating novel treads perfectly the divide between fact and fiction.

A swiftly-paced, complex novel . . . We can look forward to seeing where Grimshaw goes from here.