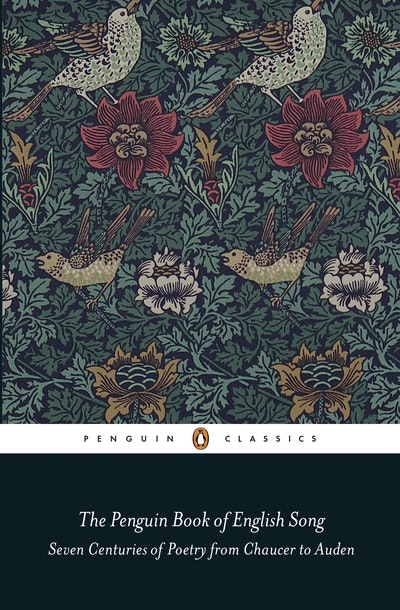 The Penguin Book Of English Song

An anthology of some of the greatest poetry in the English language.

Poetry and music have been associated with each other from the very beginning. The Penguin Book of English Song draws together a great variety of English poetry (including Irish, Scots and Welsh writers) that has reached a wider audience through the magic of music. Richard Stokes's rich anthology of verse stretches from the fourteenth century to the twentieth, collecting poems that have inspired musical settings by one hundred English poets, with a treasure trove of illuminating notes and marginalia about their lives, work and, often, their approach to music.
Stokes gathers together in a single volume a huge amount of information about English song that will assist musicians in performing these works, and enlighten all those enthusiasts who delight in the fusion of words and music that has produced countless moments of incandescent magic.
%%%The Penguin Book of English Song anthologizes the work of 100 English poets who have inspired a host of different composers (some English, some not) to write vocal music. Each of the chapters, arranged chronologically from Chaucer to Auden, opens with a precis of the poet's life, work and, often, approach to music. Richard Stokes's notes and commentaries constantly illuminate the language and themes of the poems and their settings in unexpected ways. An awareness of how Ben Jonson based his famous poem 'Drinke to me, onely, with thine eyes' on a Greek original, for example, increases our enjoyment of both the poem and the traditional song; knowledge of Thomas Hardy's relationships with women deepens our appreciation of songs by Ireland, Finzi, Britten and others; Charles Dibdin's 'Tom Bowling', played each year at the Last Night of the Proms, takes on a deeper resonance when we know that it was written after the death of his brother Tom, a sea captain struck by lightning in the Indian Ocean.
Many composers of different nationalities appear, but the book remains quintessentially British, and includes pieces that have an established place in our national consciousness: 'Rule, Britannia' (James Thomson), 'Abide with me' (Henry Francis Lyte), 'Auld lang syne' (Robert Burns), 'Jerusalem' (William Blake), 'Once in royal David's city' (Mrs C. F. Alexander), and even 'Twinkle, twinkle, little star' (Jane Taylor). The poems are printed in their original versification and spelling, enabling us to trace the development of the English language as the book progresses.
The volume presents a huge amount of information about English Song that will enlighten all those who delight in the fusion of words and music. The presence of minor as well as major poets and the unique principle of selection make The Penguin Book of English Song a highly original anthology of English verse.