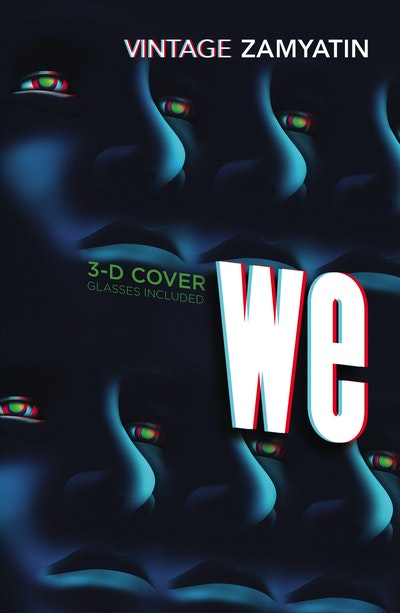 As relevant today as when it was first published, We is the first modern dystopian novel which inspired both Nineteen Eighty-Four and Brave New World.

The citizens of the One State live in a condition of 'mathematically infallible happiness'. D-503 decides to keep a diary of his days working for the collective good in this clean, blue city state where nature, privacy and individual liberty have been eradicated. But over the course of his journal D-503 suddenly finds himself caught up in unthinkable and illegal activities - love and rebellion.

Banned on its publication in Russia in 1921, We is the first modern dystopian novel and a satire on state control that has once again become chillingly relevant.

Yevgeny Zamyatin was born in 1884. He was arrested as a student in 1905 by Tsarist police for being a Bolshevik. He was then sent to England to work on Russian ice breakers in Newcastle. He has been described as a 'dapper, tweedy naval engineer'. He was also a fan of H.G. Wells . After the revolution in 1917 he returned to Russia and worked for Gorky. He was arrested again by the Soviet authorities in 1919 and 1922 and forbidden to publish his work. In 1931 Stalin surprisingly granted him permission to move to Paris. He died there in March, 1937.

This is a book to look out for

Zamyatin reminds us, Adam did not wish to be happy, he wished to be "free"

Precursor to much more famous works by Huxley and Orwell, this antidote to totalitarianism, written by someone who genuinely knew what that sort of existence was like, is the anti-Stalinist dystopia to beat them all - even Brave New World, 1984, and Koestler's Darkness at Noon

Two of the most iconic novels in the English language - Brave New World by Aldous Huxley and 1984 by George Orwell - owe an enormous debt to Zamyatin. We is the ur-text of science-fiction dystopias...the product of a powerful imagination

One of the greatest novels of the twentieth century

Zamyatin's dystopic novel left an indelible watermark on 20th-century culture, from Orwell's 1984 to Terry Gilliam's movie Brazil.Randall's exciting new translation strips away the Cold War connotations and makes us conscious of Zamyatin's other influences, from Dostoyevski to German expressionism

The best single work of science fiction yet written

A syncretic, wildly imaginative text...a passionately literary work. This book reads like nothing else on earth before or since

'We was a prophetic book not because Zamyatin gazed into a crystal ball but because he saw the likely consequences of what people were thinking in the first years of the Soviet Union. That is why we think Zamyatin, Huxley and Orwell better than the science fiction writers - because they trace conditions back to sources in the mind